Capacity Building Workshop for Chinese Twinners – How Do Civil Societies in Europe and China Organize?

On October 15th the Chinese participants of the EU-China NGO twinning met in Berlin for a capacity building workshop. They were presented with papers on an agrarian advocacy campaign, on the interdependence of civil society and freedom of press as well as on the German Energy Transformation, and engaged in a lively discussion.

Providing the participating organizations with information on environmental and social topics in the respective other region is one of the main goals of the EU-China NGO Twinning. Our Chinese participants , now in the middle of their job-shadowing stage in their European partner organization gathered in Berlin at the well-known independent newspaper “taz” to hear presentations and discuss characteristics of the European Civil society.

Jochen Fritz reported on the development of the meine-landwirtschaft.de (a Europe-wide campaign in favour of farms and against an agroindustry) national campaign and the difficulties and their successes so far.

The Chinese twinners were especially curious about the very practical work of the presented campaigns and social movements. Questions for the meine-landwirtschaft.de campaign focused on how they had attracted members and supporters with so many different work focuses, how they still came up with a common strategy, how they organized and funded events as well as their regular work and mobilized the public.

Concerning the joint action of the different stakeholders, Mr. Fritz said they had attracted most of the members through themed high-publicity events, and that it was important for they success to cooperate with very diversely oriented stakeholders, from farmers and environment activists to doctors, nutrition experts and GMO-opponents. Their most important and effective work was high-publicity awareness raising events on the one hand and signature campaigns for EU-regulation changes on the other hand.

The discussion also had a moment of clear cross-fertilizing, when Liu Yun from YEDI pointed out to Mr. Fritz a new EU regulation on a signature-based petition that also allows digital instead of written signatures, for which he was very grateful. 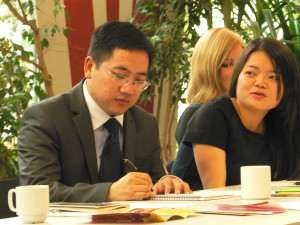 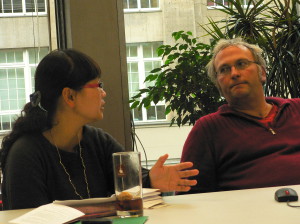 The role of press freedom and media for social movements

Mr Fritz’s input presentation was followed by the newspaper “taz”’s Asia specialist Sven Hansen who presented a paper on the role of press freedom and the the media for social movements.

In China the new media have helped civil society  a great deal to gain a public platform for their concerns. Therefore journalist Sven Hansen’s elaborate presentation on the German media landscape’s development and funding of the alternative newspaper “taz” was very much to the Chinese twinner’s interest. Mr. Hansen explained that the newspaper was less a tool for civil society. As a unique cooperative that is owned by its readers it rather depends on civil society and its desire for independent reporting.

Third, Jürgen Maier from the “Forum Umwelt und Entwicklung” (forum on environment and development) explained the Energy Transformation in Germany as an example of a social movement transformed into government policy.

In regard to this paper the participants were very interested in how one could attract investment into renewable energies and avoid investment into polluters like fossil energy power plants.

Mr. Maier answered that investment had proven to be most successfully steered by financing policies, such as a feed-in-law, according to which grid companies had to accept and pay for renewable electricity feed-ins e.g. an individual household’s solar energy. China too, had a feed-in-law, but since the local implementation was poor, it did not prove very successful up to now. On the other hand civil society organizations had played an important role in showing investors that it was neither economically nor PR-wise worth putting their money into “starving” fossile energy consumption, while on the other hand investing in renewables was a guarantee for profit.