The workshop, set in Cologne, Germany, provided the interested public with discussion on EU-China relationship and deep insights into the Twinning. The first round of EU-China NGO Twinning Exchange has successfully come to an end. Guests from Paris, London and Amsterdam joined this workshop on NGO partnerships. The workshop was meant to present first-hand reports from the participants of the EU-China NGO Twinning program and simultaneously discuss topics which are currently under debate in the EU-China relationship. The organizers also used the inputs to further improve the program. 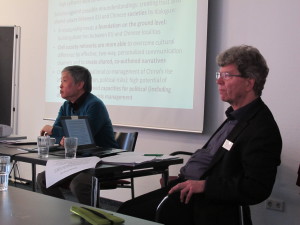 After a welcome note by Dr. Nora Sausmikat, the workshop started with an overview on current EU-China topics. Shi Ming (independent journalist) gave an input the impact of trade negotiations between the EU and China, such as the pooling of trade negotiations by the EU Commission, anti-dumping measures and  retaliation measures as reaction to trade constraints. Other topics have been rising discontent in China on food safety issues as well as on low quality of domestic products versus high-end products for export, and emission trading policies. The connection between “discourses” (such as the certification and CSR discussions) and antidumping strategies were put under consideration. During the discussion, the currently discussed investment treaty between the EU and China as well as current climate change disputes, struggles over resources, water policies and gene technology as well as food safety issues were identified as topics, in which NGOs could play an important role.

In the second input presentation, Dr. Horst Fabian focused on the inspiring and encouraging experiences of the former EU-China civil society dialogues and the potential to further develop the NGO-twinning. He argued that the development of institutional instruments would be necessary for cooperation and recommended to establish joint websites and platforms. He also recommended addressing controversial issues based on common long-term goals (sustainability, low-carbon development) and design joint long-term action plans.

During the discussion it was proposed to underline the common understanding of problems, to transmit a more complex image of China and develop a shared narrative, and to foster NGO-networking among the European NGOs working on China.

In the afternoon session, the European exchange participants presented their experiences as well as the results, impacts and benefits of the exchange. 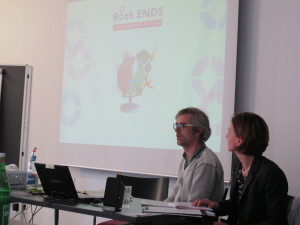 Pieter Jansen from BothEnds (Netherlands), who paired up with Chen Yu from Green Watershed (China), reported enthusiastically on the benefits of this exchange for both organizations. Their joint work on the comparison between the Green Credit Policy of China with policies of European banks as well as the World Bank produced some new perspectives which have been presented in Washington, Kosovo, Amsterdam, Peking and Kunming. Their exchange showed also how the snowball effect of international NGO networking is a good side effect of the twinning.

Akim Walta from Berlin Massive (Germany) described how the twinning enabled him and his partner from Guangzhou CHEE productions to study the working methods of the partner. The twinning provided him the opportunity to deeply connect with the organization without the usual time pressure when meeting shortly for realizing a small project. He displayed hip hop and graffiti art as a very effective communication tool for any kind of (also political) message. He suggested creating a more topic focused platform to address the specific target group of the organization.

Michael Bender from Green League Germany highlighted that he learned a lot during the exchange, sometimes felt reminded of his experiences under socialist rule in the GDR. He pointed out that Liu Yun`s (Yunnan Environmental Development institute) stay in Germany foremost created the opportunity to network with other organizations and to learn about Green Leagues working methods. During his stay in China he benefited a lot from the capacity workshop in Kunming and the events YEDI organized for him. He also made some new valuable contacts with other NGOs which will provide a good basis for future cooperation. Pieter from BothEnds suggested some contacts in the Netherlands which also could be integrated in future Germany-China cooperation. 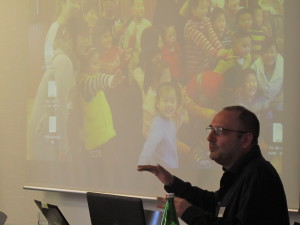 Dave Carey from Chickenshed (UK) highlighted the power of theatre and music for surpassing cultural and language barriers. In his commented videos he vividly described their exchange with Hunan Aimier (China). He will most probably return to China again this year in summer to continue the cooperation, this time funded by a Chinese institution.

During the concluding discussion it was highlighted that memories of the twinning are also about a lot of fun and deep insights into the reality of the others society. Most of them experienced the exchange as a life changing experiences, for the organization as well as for the exchange fellows themselves.