On October 25th, the 2014 NGO exchange capacity building side seminars started off with a seminar on advocacy in Chinese civil society in the Beijing NGO café “Swanport”. Providing the participating organizations with information on environmental and social topics in the respective other region is one of the main goals of the EU-China NGO Twinning.  It was also the first occasion, for most of the EU-China NGO exchange participants to meet as a group. 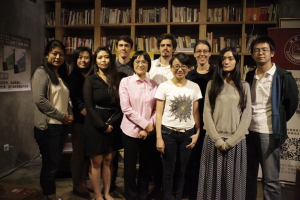 After a short introduction into the background and aims of the EU-China NGO Twinning by Inga Gebauer from Stiftung Asienhaus, the Twinners and a broad audience of NGO representatives listened to presentations on different advocacy work approaches adopted by Chinese NGOs, a newly developed web-based approach on public participation in environmental impact assessment , and on Chinese NGO’s work on Climate Change.

Guo Ting from China Development Brief first gave an introduction on historical developments within Chinese civil society, as they became apparent in CDB’s research reports on the Chinese NGO scene. According to CDB’s findings from their 2006 and 2013 reports on Chinese advocacy NGOs much has changed in the past 10 years. Before there was little space for public advocacy, NGOs saw themselves rather as cooperators of the government, focusing on awareness raising rather than actively lobbying for improvements in government policy or criticizing the business/ private sector. Nowadays, more NGOs are adopting a rights-based perspective or a supervisory, advocacy-based approach when dealing with businesses, advocacy methods have diversified, now also including networks, social media, impact litigation, performance art and petitions. Moreover, NGOs have undergone sectoral specialization, now working more professionally. They have also formed nationwide topical networks to coordinate their work. As one case of NGO’s legal advocacy Guo Ting cited the case of Cao Ju, a female worker who was denied a job on the basis of being a woman. With the help of several women’s rights organizations she managed to win a compensation. This court case is considered the first case in China where a company was successfully sued on the basis of gender discrimination.

Guo Ting pointed out that despite the positive changes civil society activities still take place in a political space that remains constrained – they often are dependent on the support of official stakeholders or the police to be able to operate – and they have to be extremely careful with the choice of their topic areas and advocacy approaches. Legally sanctioned issues (such as HIV and the sex industry or confronting state-owned enterprises) are considered high risk, as well as confrontational events that draw too much attention. 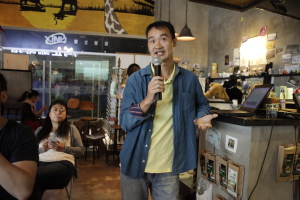 As a web based network for public participation in EIA, the Chongqing Liangjiang Voluntary Service Center has launched an internet portal which allows users from all over the country to locate sources of industrial pollution they see 24 hours a day. The can upload descriptions of the time, location and pollution sources, share photos, video clips and maps. Liangjiang’s group of environmental experts will then analyse and verify the materials and forward the verified cases to media and relevant official departments for further investigation. The website also informs users on the management status of the cases when they are uploaded, and accepts comments or suggestions for handling cases that the NGO collects and forward this to relevant environmental departments. All information on polluting production plants is utilized and visualized on a map of China.

Moreover, the website contains a list on how much penalty which polluting company has been fined to pay. It also informs on the names of EIA companies and EIA experts who have conducted the assessment of production plants and how many of these plants were shut down or fined after taking up production for non-compliance with environmental standards. Xiang Chun pointed out that this kind of information is a powerful tool for naming and shaming EIA consultants who do weak assessmentsAlthough only online for about a year, the environmental data on the website is already very comprehensive.

The European Twinners were curious on whether the industry was rather willing or reluctant to disclose their environmental data, potentially claiming this information was considered a “business secret”. Xiang Chun explained that companies were legally obliged to disclose environmental data, and that there even have been successful court cases where NGOs sued companies for the disclosure of this information. 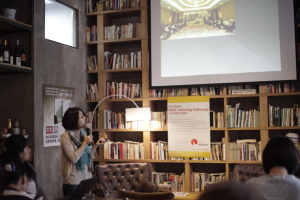 Li Ang, working for Friends of Nature in China in her presentation introduced Chinese NGO’s role in the area of Climate Change.

China overtook the US as the world’s number one carbon dioxide emitter, and Chinese Civil Society is invigorating up their involvement and role in the mitigation of climate change impacts as well as in advocating emission reduction and climate change targets. Chinese NGOs have adopted a domestic approach in mitigation and adaptation to climate change impacts, but are also increasingly active on an international level.  As part of NGO’s domestic adaptation and mitigation work, she introduced several initiatives which target consumers and advocate the usage of energy saving devices. or object the over usage of air conditions.

Moreover, in 2011 a group of over 40 NGOs founded the so called C+ action network with an objective to go beyond national targets, linking the topic of climate change to economic development and sustainability and go beyond China to influence the world. The network organizes regular reflection meetings on the climate negotiation.

In their policy advocacy work, Chinese NGOs lobby for a change in the domestic energy system (also raising awareness for the link between coal consumption and air pollution/health issues), and energy efficiency measures. Moreover they monitor an emerging carbon market and offer consulting to relevant government agencies on the topics of the development of this carbon market and related fiscal measures.

Since 2008 Chinese NGOs, united under the lead of the China Climate Action Network CCAN have also been present at all Conference-of-Parties (COP) negotiations, and have been co-drafting a number of joint NGO position papers.  Li Ang highlighted that by now it is a regular process that Chinese NGOs are present at the COP events, warming up the negotiation by communicating with media and Chinese delegations.  NGOs introduce and analyse the key issues for COP to media and keep them updated on the process on site, and then draft a summary or evaluation by the end of each COP.

Li Ang also pointed out the communication and expertise challenges Chinese NGOs are facing: According to her experience, domestic Chinese NGOs have less specific understanding on climate change topics, however, they do have more local experiences comparing to international NGOs. But the growing number of cooperation and capacity building projects between International and local grassroot NGOs can help to change this situation.