On the 20th of October 2014 the Chinese NGO Twinners gathered in a conference room at the newspaper die tageszeitung (taz) to hear presentations on developments and challenges European NGO’s are confronted with. Providing the participating organizations with information on environmental and social topics in the respective other region is one of the main goals of the EU-China NGO Twinning.

Four European civil society experts and activists gave papers on an EU-wide agrarian advocacy campaign, on the interdependence of civil society and freedom of press, on possibilities of lobbying on the EU-level via the European Environmental Bureau and on the clean-air campaign of one of the biggest German NGOs.

The Role of Press Freedom and Media for Social Movements

How did it all begin in the 1970s? Which role did the media and press freedom play? Sven Hansen, the taz’s Asia specialist opened the workshop with a paper on the role of press freedom and the media for social movements.

In China, the linkage to media is crucial for NGOs, especially the new media have helped citizens to gain a public platform for their concerns. Therefore journalist Sven Hansen’s elaborate presentation on the German media landscape’s development and establishment of the alternative newspaper “taz” was very much to the Chinese Twinner’s interest. Mr. Hansen explained that the newspaper was less a tool for civil society. As a unique cooperative that is owned by its readers it rather depends on civil society and its desire for independent reporting. 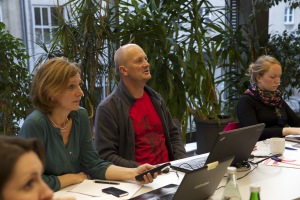 Jochen Fritz reported on the development of meine-landwirtschaft.de (a Europe-wide campaign in favor of farms and opposing an agroindustry) campaign and the difficulties and their successes so far. Jochen was one off the organizers of the “Wir haben es satt” Congress in Berlin in early October 2014, where three Chinese Agrarian activists participated. This campaign is now in its third year and developed into a very successful international campaign. Their advocacy campaign represents an alliance of different NPOs/NGOs who fight against industrialized agriculture.

The Chinese Twinners were especially curious about the very practical work of the presented campaigns and social movements. Questions for the meine-landwirtschaft.de campaign focused on how they had attracted members and supporters with so many different work focuses, how they still came up with a common strategy, how they organized and funded events as well as their regular work and mobilized the public.

Concerning the joint action of the different stakeholders, Mr. Fritz said they had attracted most of the members through themed high-publicity events, and that it was important for they success to cooperate with very diversely oriented stakeholders, from farmers and environment activists to doctors, nutrition experts and GMO-opponents. Their most important and effective work was high-publicity awareness raising events on the one hand and signature campaigns for EU-regulation changes on the other hand. 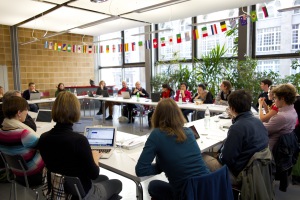 In her presentation, Alison Abrahams from the European Environmental Bureau introduced the advocacy and communications work of her organization. With an impressive 140 member organizations in 30 countries the Brussels based EEB functions as an umbrella organization for European environmental NGOs, lobbying for environmental justice, sustainable development and participatory democracy on the EU-level. Ms. Abrahams introduced the EEB’s advocacy work. They utilize publications and high profile public events, but also try to directly lobby directly with stakeholders. They try to ultimately influence European politicians’ decision for strong EU environmental laws plus for the correct implementation of these laws in the EU member states. Moreover they are organizing an extensive media campaign, utilizing social media and position papers (often jointly drafted with member NGOs), but also approaching journalists to place environmental concerns and topics.

The Chinese and European participants were especially curious on how the EEB chose focal topics to work on. Alison explained that they mostly put their focus on the area that is or will be on the agenda in the European parliament / the European Commission – air at the moment, water in the future, but they also listened to their topical working groups.

The Deutsche Umwelthilfe (engl. “German Environmental Aid”) is an independent non-profit association focusing on protecting nature, the environment and consumer rights. Ms. Grass introduced their Europe-wide campaign “Soot-free for the Climate”, which they are aligning in cooperation with several other NGOs from all over Europe. She pointed out that air pollution in China is all over the media, but that actually 80% of European urban dwellers are exposed to air pollution levels that exceed the WHO standards. In order to clean air from pollutants, their campaign focuses on reducing diesel emission from traffic up to 100% by 2020. Apart from posing a high health risk, diesel soot is also made responsible for global warming.

The campaign relies on awareness raising and best practice sharing, through measures such as a clean air city ranking of European metropolises. Moreover information transfer is done by independent research and publications on the topic. The campaign members also directly lobby with policy makers on different levels. They have had impressive achievements: Thanks to their advocacy work, many European cities have so far introduced low emission zones and four countries have adopted the legal basis for environmental zones and the imperative introduction of exhaust filters for inland, ocean and cruise ships, locomotives and in the construction industry.

The campaign also engages in impact litigation, with the 2008 introduced “right to clean air” for all European citizens and the 2013 German national right for Environmental NGOs to sue for breaches against EU environmental law as an infrastructural support.