Kirsten Reinders from Cologne has been staying in Shanghai since the beginning of August. Together with her Chinese twinning partners from ‘Dinghaiqiao’ and AIFEN she discusses waste reduction and waste separation, comparing Chinese and German strategies. Kirsten’s ‘Büdchen am Nikolausplatz’ seems to be a kiosk on the outside, but actually is a lot more. She and her colleagues organize multiple cultural events such as concerts, readings and exhibitions. At the same time they provide information on waste reduction in everyday life. That’s also what the Dinghaiqiao Community Center is doing right now on a more fundamental level. While waste separation is quite widespread in Germany already, Dinghaiqiao wants to draw attention to it in China. Read what the two twinners talked about in detail in this short diary entry: 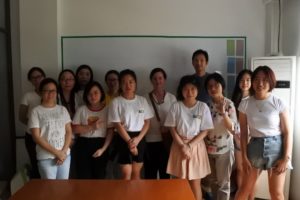 Yesterday I’ve had the chance to present our work of the ’Büdchen am Nikolausplatz’ to the colleagues of Xiaolu (Aifen) in their meeting room. They were especially interested in our Recup system, a deposit system that we use for a more sustainable coffee to go. Also, I could inform them on how we in Germany organize the deposit system for plastic bottles. Since they are working very hard on the education of the residents of Shanghai in waste classification, they were very much interested in how this worked in Germany. I could give them a brief overview and also shared my own experiences when the Dual system was established in Germany and the resistance it faced at the beginning.