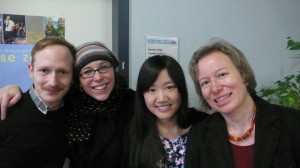 The pilot phase of the exchange program took place from September 2012 to February 2013.

It started with a kick-off meeting in Beijing with more than 50 Chinese NGOs participating. A similar meeting for representatives of European NGOs took place in Cologne in February 2013.

On January 13th Daniel Worrings of the Düsseldorf project started a job-shadowing stage at CYCAN to gain some first hand experience in China.

Please find documents about the pilot program below: